Homemade donuts rock and always taste so fresh! Try out my Easy Apple Fritters and these Easy Pumpkin Donuts (With Cake Mix) and obviously these Homemade Jelly Doughnuts (Sufagniyot) and you won’t ever go back to store-bought ones ever again!

Enjoy them during Fall or Thanksgiving for breakfast or even dessert. It’s also an awesome way to use up a surplus of apples and/or cider.

How to make apple cider donuts?

Unlike traditional fried donuts that are made with yeast and are more bread-like, these ones have a muffin-like texture. They super soft, moist, tender and packed with a strong apple cider flavor and warm spices (especially cinnamon, nutmeg and cardamom). 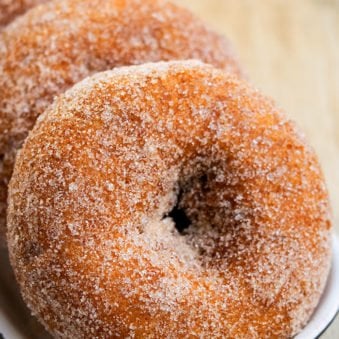