It’s time to add another pie recipe to the growing collection. I have already shared the recipe for this Easy Caramel Apple Pie and this classic Easy Homemade Apple Pie.

Both of them get rave reviews and even people who have never ever baked in their lives can make them without any problems! It’s the perfect Thanksgiving dessert and an awesome way to use up a surplus of apples.

What is the difference between a Dutch Apple pie and French Apple Pie?

The Dutch version is an apple pie with crumb topping. The French version is very similar but based on my research, it also has raisins and nuts in the filling.

What are the best apples for baking pies?

Granny Smith, McIntosh, Honeycrisp, Golden Delicious, Gala apples are best. Use a combination of them, if you like.

This topping is made by roughly mixing oats, flour, sugar, cinnamon and butter. 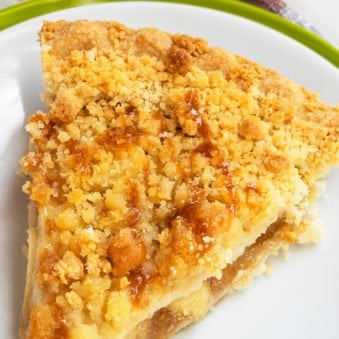