Typically, cupcakes and even cakes for this patriotic holiday are decorated with whipped cream, strawberries and blueberries. I wanted to do something different and initially thought of using my Russian Piping Tips Tutorial but not everyone has those and I wanted to keep this tutorial as simple as possible.

You really to need to include this easy dessert for your upcoming 4th of July party.

Can you add food coloring to cake batter?

Yes! Divide the batter into 3 portions. Leave one as is (yellowish white). Tint the other blue and the final one red. Pour spoonfuls of colorful batters in cupcake liners randomly and bake and you will end up with festive colorful cupcakes.

How to make red frosting?

You need to use a lot of red gel coloring. You also need to let this frosting sit in the fridge for 2-3 days, in order for the color to deepen. It is a notoriously hard shade to make at home quickly. That’s why I recommend buying store-bought red frosting, if you are short on time. 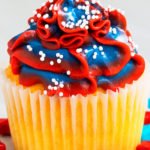