Learn how to make quick and easy homemade stabilized whipped cream recipe from scratch with simple ingredients and gelatin. Creamy, fluffy, stable and holds its peaks!

This is one of my favorite frostings. It is lighter than a traditional buttercream, and it still pipes like a dream! You may have noticed that classic whipped cream is made with just heavy cream, powdered sugar and vanilla. It deflates quickly, losing its peaks, and therefore makes piping anything beautiful impossible. This version, with gelatin, stabilizes the cream and secures those peaks so that they don’t deflate, making it perfect for piping and frosting cakes and cupcakes. If you prefer a classic buttercream, this try this American Buttercream Frosting Recipe or this super fast classic Seven Minute Frosting.

How To Make Easy Homemade Whipped Cream Recipe From Scratch?

Is Whipping Cream The Same As Heavy Cream?

They are made of the same things, but heavy cream has a slightly higher fat content than whipping cream.

Why Is My Stable Whipped Cream Runny And Watery? Why Won’t It Whip?

This usually mean the whipped cream is under-whipped. Keep whipping until soft peaks form. If you over-whip cream past the point of peaks, then it will become runny and watery again. Pay close attention while whipping to avoid this.

Why Did My Whipped Cream Curdle?

This means the fat is separating from the whey because the cream is over-whipped. Stop when you reach soft peaks!

You can not replace with half and half, condensed milk, or evaporated milk– Because it will not whip to become light, airy, stabilized, and pipeable.

Make sure mixing bowl and attachments are chilled– Because this helps the cream to whip more quickly and effectively.

Adjust amount of powdered sugar– Add more or less according your preference on sweetness.

Don’t over-whip– Because this will make the cream curdle or become butter.

Add color– You can use gel or liquid food coloring to match the theme of your dessert.

You can use it for piping– This whipped cream is stabilized for the purpose of piping it. Choose your favorite piping tip and create a masterpiece.

How to prep gelatin? In a small microwave-safe mixing bowl, add gelatin and water and let it bloom and become solid at room temperature. This takes about 5 minutes.  Melt this gelatin mixture in the microwave at 5 second increments and be sure to mix each time. It should be liquid but not very hot. Use a whisk to stir the mixture together to make sure it’s smooth.

What is a soft peak? When you pull the beater up from the cream it should form a peak that holds up momentarily before settling back into the cream.

What is a stiff peak? A stiff peak is formed you pull the beater up from the cream and a peak forms and does not settle back into the cream.

How do you beat heavy cream?

The basic method is that you whip heavy cream, powdered sugar and vanilla extract until soft peaks form. Then, you mix in any additional extracts or add-ins of your choice (peanut butter, maple syrup e.t.c.) and whip until stiff peaks form.

Refrigerate– In a sealed container for up to 3 days.

Freeze– You can not freeze stabilized whipped cream to be piped again later. However, you can freeze a dessert with the frosting on or in it, to eat at a later date. It will be good for up to 1 month. 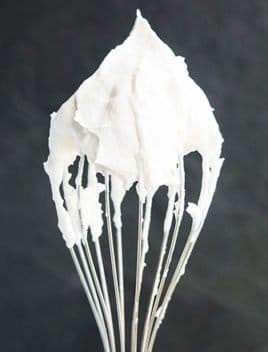 11 comments on “How to Make Homemade Stabilized Whipped Cream”