Breakfast is considered to be the most important part of they day. So, why not indulge in this delicious butter or my Baked Apple Cider Donuts and Apple Fritters (One 30 Mins).

Today’s recipe is an awesome way to use up a surplus of apples, especially if you just went apple picking.

It’s fresh plus smells and tastes amazing! Even though it’s called butter, it doesn’t have any butter in the recipe. It’s mostly used as a spread, similar to how you would spread butter.

What is apple butter?

It’s a very concentrated form of apple sauce that’s created by cooking apples long and slow until the sugar in the apples caramelizes and turns a deep brown color. It’s typically used as a spread but can also be used as a topping or filling or even glaze.

How to make apple butter in crockpot? Stovetop?

Stovetop instructions– Add all the ingredients plus 1 cup apple juice or apple cider in a large nonstick pot. Cover and cook on Low heat until apples are very soft. The, uncover and puree with a hand-held immersion blender until smooth. Cook uncovered for a bit longer until butter is thickened and reduced to your desired consistency.

What is the difference between applesauce and apple butter?

Both of them are slow cooked apples with spices. However, the butter is cooked for longer. This causes the sugar in the apples to caramelize and turning a deep brown color. It’s smoother, thicker and has a more intense apple flavor than applesauce. It’s basically a concentrated version of applesauce. The butter also has a longer shelf life of about 2 weeks than compared to simple applesauce.

What are the best apples for this recipe?

Typically, you should use your favorite apples or ones whose flavor you like the most. I prefer using a combination of various apples such as Granny Smith, Fuji, McIntosh and Honey Crisp. You can also use Golden Delicious, which are softer.

What is homemade apple butter used for?

There are are so many uses:

Once it comes to room temperature, store in sealed container or jar in the fridge for up to 2 week.

You can also freeze this in a sealed container for up to 1 month. Let it thaw overnight in the fridge.

Canning apple butter is another option. Just follow the typical canning method and store in a cabinet and you can enjoy it months later. Fill sterilized jars with butter, screw on lids and and submerge in boiling water for about 10 minutes. As the jars cool, the lids will suction down and pop, becoming airtight. 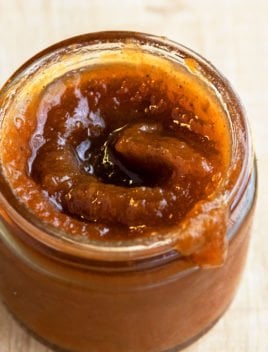