These fluffy sweet yeast rolls are great for breakfast or brunch. Unlike traditional overnight cinnamon rolls, which take very long to make, these are ready in 1 hour and still taste delicious and the recipe never fails!

How to make best cinnamon rolls?

Typically, Cream Cheese Frosting is used by mixing together cream cheese, powdered sugar, butter, vanilla extract until smooth. If you don’t like the tangy cream cheese flavor, you can also use American Buttercream Frosting.

How to make cinnamon roll glaze?

How to keep rolls soft? 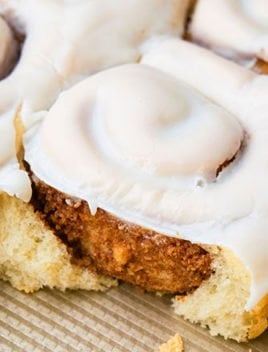