Bite-sized, quick and easy cinnamon French toast sticks recipe, homemade with simple ingredients. Soft on the inside but firm and crispy on the outside. Perfect for breakfast and brunch!

Breakfast is the most important part of the day and it can also be the most delicious part of the day with today’s recipe. No need to buy them at stores any more because they are so easy to make at home, plus they taste so much better!

They are great to serve on Christmas mornings, along with this Eggnog French Toast of course.

In my opinion, the best french toasts are crispy on the outside but soft on the inside. They should also be firm enough to pick up without going limp and I am sharing all my secret tips and tricks for achieving that!

How to make french toast sticks?

How to freeze and reheat frozen french toast sticks?

Prepare them, as per instructions below but don’t coat them in sugar.PLace them on a cookie tray, lined with parchment paper and let them cool down to room temperature. Freeze for 2-3 hours. Then, transfer them to an airtight sealed container for up to 1 month.

However, with all that being said, I DO NOT like to freeze and reheat them because their texture is just not the same any more. They are no longer as crisp as they were before, when freshly prepared.

Between the two, I prefer the classic pan-fried version. It has the best texture and flavor.

In the baked version, you will dip the bread in egg mixture, shake off excess, place slices on a baking tray, bake at 350 degrees for 10-12 minutes on one side, then flip them and bake the other side for 10-12 minutes until golden brown. Remove from oven, brush melted butter over each bread stick and coat it in cinnamon sugar.

The classic and most popular choice is maple syrup or a dusting of powdered sugar but you can try some of these other ideas too: 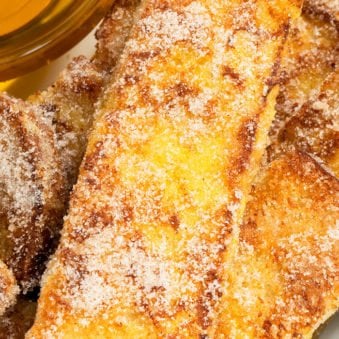