Quick and easy cinnamon roll cake recipe (cinnamon cake or cinnamon swirl cake), homemade with simple ingredients. Super soft and moist! Starts off with a yellow cake mix and is loaded with swirls of cinnamon sugar.

*Thank you Meijer for sponsoring today’s post. As always, all opinions are mine.*

Imagine all the flavors of my Easy Homemade Cinnamon Rolls (1 Hour) but in a cake form. That’s the beauty of today’s recipe! You can enjoy it for dessert or even breakfast and brunch.

This cake surprisingly has no butter or oil but it still has this amazing butter flavor, thanks to the use of vanilla pudding mix. It’s very soft and fluffy but still firm, like a pound cake and overall, has an incredible texture.

How to make cinnamon roll cake?

For this recipe, I went to Meijer and tried out their “Shop and Scan” method of shopping. If you are like me and detest those long lines at check-out, you are going to love this method. You simply walk around the store, gathering your groceries and scanning the barcodes on your Meijer app. Then, you get to the self-checkout station and just pay and leave with your groceries. It is so easy and so convenient! This will be such a time-saver, especially during the holidays, when those lines get super long and annoying. 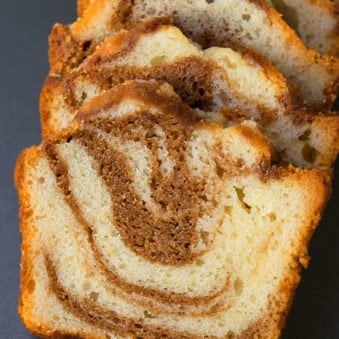