Use this cake decorating tutorial to learn how to make fondant snowman topper and fondant penguin topper for cakes. Great for Winter cakes.

This weekend, I was working on three winter cakes with fondant snowman topper and fondant penguin topper.

I am very happy with how they turned out. 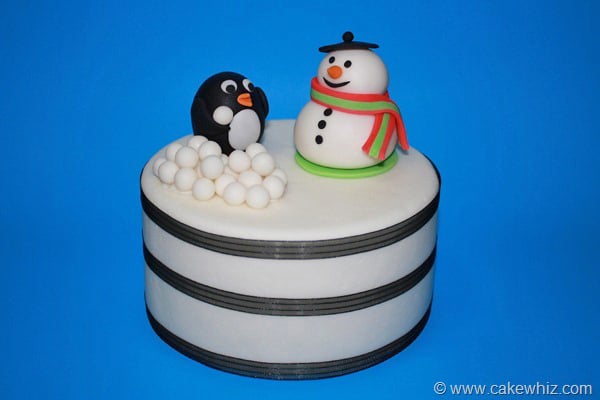 The snowman looked very French to me…so I named him Mr.Frenchie. 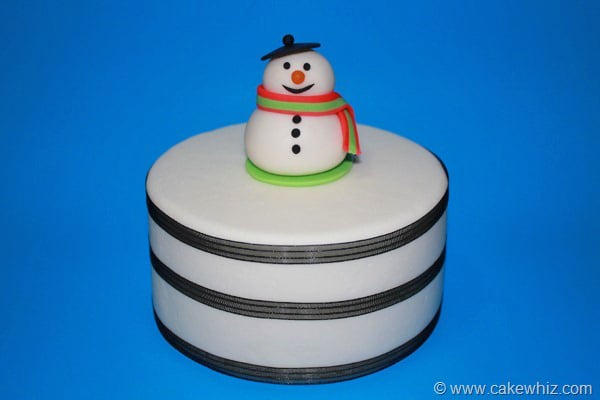 Check out his hat and fashionable Christmas scarf. 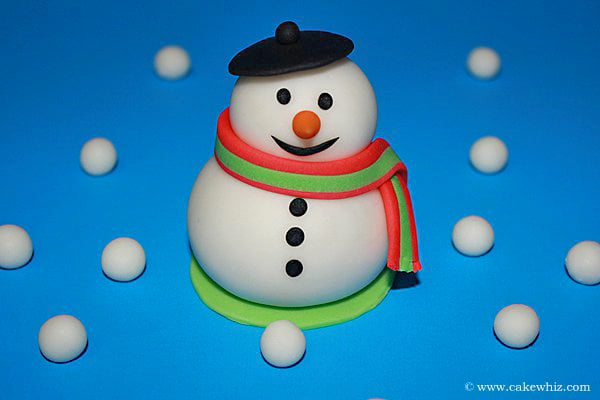 As for the penguins…

Aren’t they just the cutest? 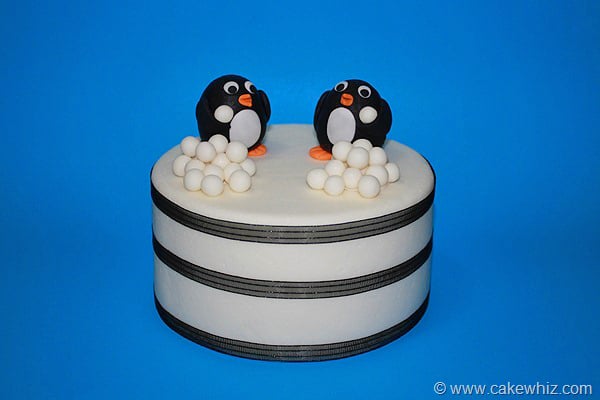 These are the instructions for the fondant SNOWMAN:

Step 1:
Roll out two balls of white fondant (my marshmallow fondant recipe). One should be bigger than the other. The big one will be the body and the small one will be the head.
Stick a toothpick into the center of the big ball. You can also use an uncooked spaghetti instead of a toothpick.
Note: If you are using a toothpick, break off the sharp point of the toothpick after sticking it into the body… I forgot to take a picture of that. 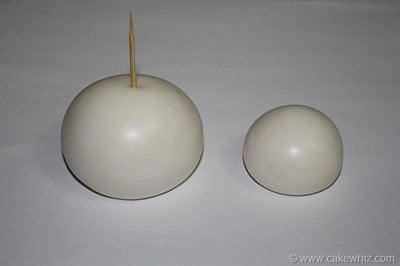 Step 2:
Place the small ball on top of the toothpick until the body and head are in place and not wobbling around. 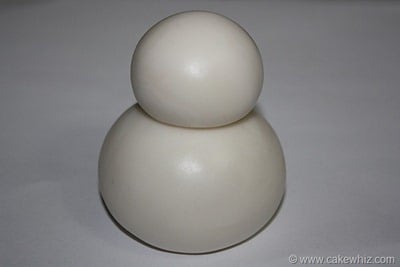 Step 3:
Roll out 5 small black balls. Two of these will be eyes and three of them will be buttons.
Press three balls onto Mr.Frenchie’s body with your finger. No water needed.
Now, press the remaining two black balls onto his face to make eyes. Again, no water needed. 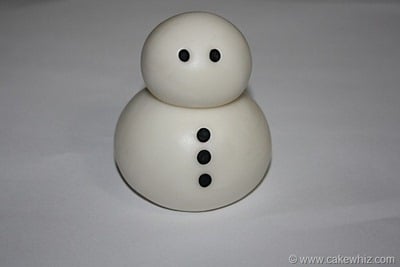 Step 4:
For the hat, roll out  two black balls of fondant. One ball should  be bigger than the other. Flatten the big ball with your finger. Leave the small ball as is.
Brush some water on the center of the flattened circle.
Place the small ball on top of this water mark and gently press to hold it in place. The hat is ready!
Brush some water on top of Mr.Frenchie’s head.
Place the hat on the water mark and and hold in place for a few seconds until it sticks. 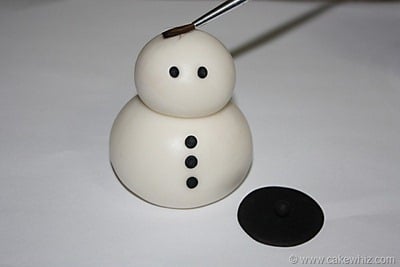 Step 5:
For the lips, roll out black fondant into a “smiley” shape.
Press it into the face of the snowman with your finger to make Mr.Frenchie  smile. Again, no water needed.
Note: You can also use black royal icing (thick consistency) or black edible marker to make the smile, eyes and even buttons. 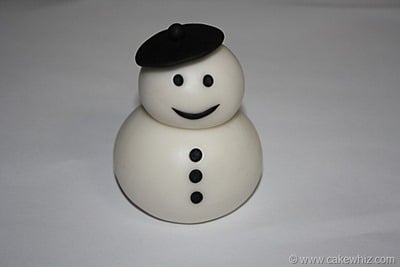 Step 6:
Gently press the cone on the water mark until the nose holds in place. 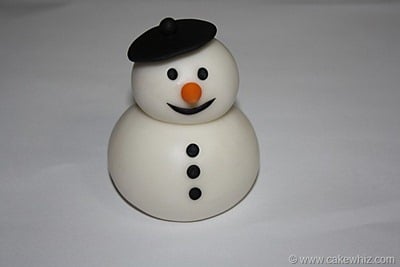 Step 7:
For the scarf, roll out long snakes of red and green fondant. Place them side by side and using your rolling pin, roll on them until they stick to each other.
Wrap the scarf around Mr.Frenchie’s neck and brush some water to secure it in place. 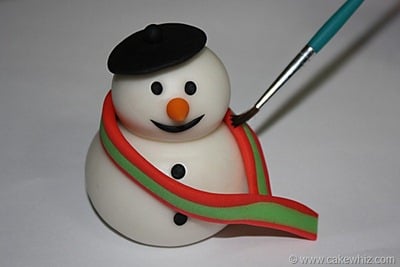 These are the instructions for the fondant PENGUIN:

Step 1:
Roll out black fondant into an egg shape. I used my homemade marshmallow fondant.
This will be your penguin’s body and head.
Roll out a small ball of white fondant and flatten it into an oval shape.
Brush some water on the center of the penguin’s body. 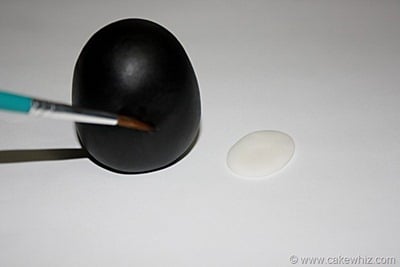 Step 2:
Position the white oval shaped fondant on this water mark and press gently to secure into place. 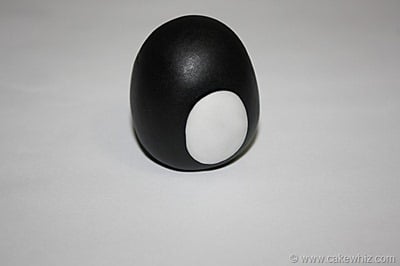 Step 3:
For the eyes, roll out two small balls of white fondant and flatten them into circles.
To complete the eyes, roll out two very small balls of black fondant . Place them on top of the white circles and press gently until they stick to each other.
Brush some water on top of the penguin’s black body.
Position both the eyes on this water mark and press gently to secure them into place. 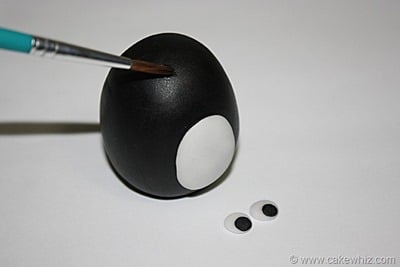 Step 4:
For the beak, roll out a small ball of orange fondant and press into a circle.
Using your fingers, shape your circle into a diamond shape. 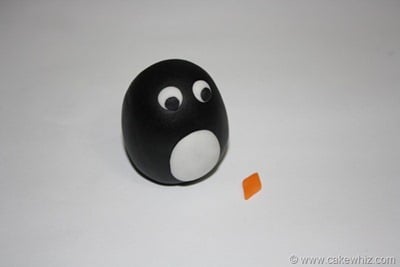 Step 5:
Press the center of this orange diamond with a toothpick until it sticks to it.
Brush some water where you want the penguin’s beak to be positioned.
Gently press the toothpick holding the beak onto the water mark and secure into place. 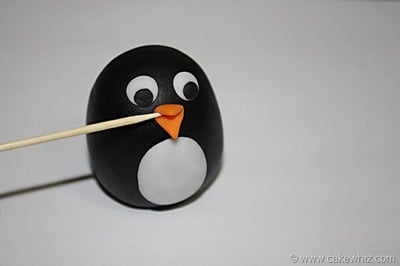 Step 6:
For the feet, roll out two balls of orange fondant and flatten them into an oval shape. 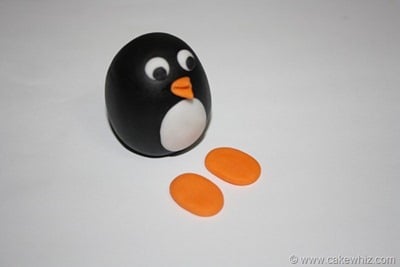 Step 7:
Brush the bottom of the penguin’s black body with water and stick the feet into place.
To create toes, press a toothpick thrice on each foot. 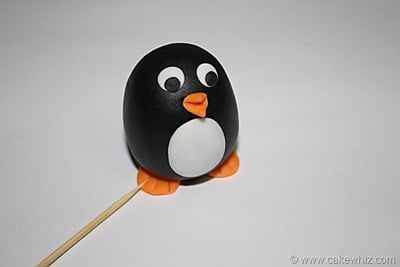 Step 8:
For the wings, roll out two balls of black fondant and flatten them into circles.
Using your fingers, mould them into petal shapes.  I did not have a petal cutter but you can use that to make wings too.
Brush the sides of the penguin’s body with some water. 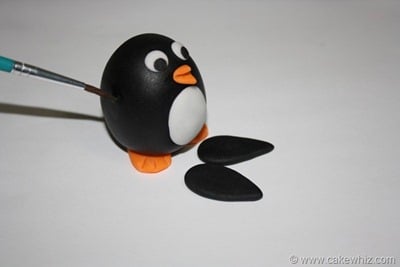 Give your fondant penguins some snowballs and they are ready to have a snowball fight. 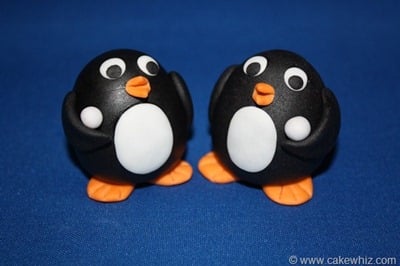 Hope these tutorials for fondant snowman and fondant penguin were helpful.