If you guys enjoyed my Cinnamon French Toast Sticks and Eggnog French Toast, you are going to love today’s recipe too. With its fluffy texture and sweet flavor and spiced aroma, it’s great for breakfast or brunch.

Just a quite note that this is different than “eggy bread” which is typically savory.

How to make french toast from scratch?

What to serve with homemade French toast recipe? (Toppings)

There are many toppings and stuffing other than syrup and butter that you can try. Here are some ideas:

What is the best bread for French toast?

It can be made with the lightest, thick and soft bread loaves. Texas toast, challah, and brioche are the best but you can use whatever loaf of white bread you have on hand.

Breads like whole wheat, hardy grain, pumpernickel, sour dough, or rye will work as well. However, they have additional ingredients that could alter the flavoring of the final product. The texture of bread is also a factor because certain breads have a harder crust. If you cook them with a harder crust, you’ll get a crunchy end result.

Typically, it’s made by mixing together the following:

People can add other ingredients like cinnamon or additional extracts or replace milk with heavy cream.

Roll Ups– cut the crust off of each bread slice, roll them flat with a rolling pin. Then, add your favorite filling to them such like jams, fruit preserves, Nutella, fresh fruits, chocolate. Dip in egg batter and pan-fry until golden brown.

Stuff it– My favorite version is s’mores. Add chocolate chips and marshmallow in between two slices and cook them until it’s ooey gooey and and melted.

Use other types of bread– I used thick white bread (Texas Toast) but you can use brioche, challah e.t.c.

Add other flavors– Such as variety of extracts of even zests.

Refrigerate– Leftovers can be refrigerated in a sealed container for 1-2 days but they won’t taste as good as freshly made ones.

Freeze- I personally don’t recommend freezing because they don’t taste as good when they thaw.However, people freeze them all the time in sealed freezer bags for up to 1 month and don’t seem to mind them. Don’t add the sugar topping if you are planning to freeze.

Reheat- Warm it in the microwave or stovetop or even toaster oven.

Why is my french toast soggy? You may have soaked the bread in the egg and milk mixture for too long and it absorbed a lot of it. Another reason could be the addition off too much milk in the egg mixture. Measure properly with measuring cups.

Use stale bread– Because fresh bread soaks up too much egg custard mixture and the end result can be soggy or limp toast.

Do you have to remove the crust? You don’t have to. You can keep it or remove it. It’s a personal preference.

Make ahead instructions– You can make the egg mixture and cinnamon sugar a day in advance plus you can have the bread sliced and ready the day before too. This way, all the prep work is done and you can get started immediately.

Coat in cinnamon sugar quickly– If they cool down, the sugar won’t stick to the toast.

Use unsalted butter– Because this prevents them from becoming too salty.

Don’t overheat the pan– If it’s too hot, you will burn the tops of the toast, while leaving the inside soggy. It won’t cook evenly. 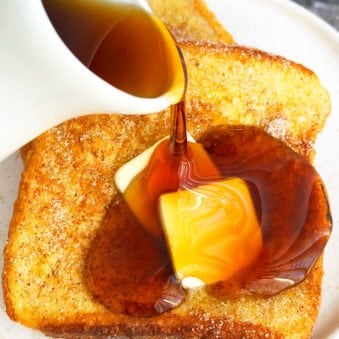